1   Annual average concentrations of NO2 are above UK limits across the Borough, which is why Bromley’s Air Quality Management Area has been expanded. This is stated on page 10 of the Air Quality Action Plan 2020-2025 (AQAP) document (here), on page 1 of this report, and this statement is also supported by the following (extremely convoluted) statement, found in Appendix A of the AQAP:

Bromley has met all of the AQO’s other than the annual mean objective for the pollutant NO2. It is a statutory requirement that an AQMA be declared for areas where air quality does not meet the AQO limits for certain pollutants…As required by the LLAQM, from 2020 onwards, local monitoring and mapping provided by the GLA must be utilised to review whether any declared AQMAs should be revised. This review was undertaken, and whilst modelled data from the GLA shows an overall decline in the annual average concentrations for NO2 (see Maps 2-5), the 2020 modelled data supports an extension to the AQMA (see Map 3).

2   It seems extremely unlikely that Bromley Council has evidence to back up the statement about schools on page 8, and this points to the need for more monitoring, to assess the real exposure for children.The statement reads as follows:

According to GLA data, no primary or secondary schools in Bromley are exposed NO2 concentrations that exceed to annual limits

Given that the AQAP states that the only data Bromley Council has about NO2 concentrations outside all schools in the Borough are modelled LAEI data (page 10), and given that LAEI estimates are calculated for 1-kilometre squares, Bromley Council does not have sufficiently accurate data to support this claim, and should therefore remove it from the AQAP document, as it is misleading (at best). This leads to the next point…

3   The AQAP commits Bromley Council to increase its monitoring of air quality, but does not commit the Council to take action in response to this increased monitoring until after 2025. Bromley Council collects very little air quality data – the LAQN map of monitoring sitesshows almost all other London Boroughs have a greater number of active monitoring sites than Bromley, which has one (Harwood Avenue). Bromley has, historically, been one of a small number of London Boroughs that decided not to report monitoring data via the London Air Quality Network (LAQN), which “was formed in 1993 to coordinate and improve air pollution monitoring in London” (Bromley reported data via LAQN until July 2010, reported data only via the Council’s website for a decade, then resumed reporting via LAQN at the start of 2020). The AQAP states Bromley will expand its monitoring, which is positive, but why should Bromley residents be expected to accept an Air Quality Action Plan which is based on such limited evidence, and wait another 5 years before the Council reconsiders what action is needed to tackle air pollution?

4   Severely downgraded aspiration and lack of targets in key areas.Page 2 of the AQAP states that this draft “contains all the actions we will take to improve air quality in Bromley between 2020 and 2025.” The 2020-2025 AQAP shows that in many areas the Council is planning to do far less than it committed to do in its 2010 AQAP (here) which, for example, included a commitment to take action on bonfires and promote car sharing/car clubs. In key areas, the 2020-2025 AQAP lacks targets, for example action 25 in the Air Quality Matrix (provision of infrastructure to support walking and cycling and encourage mode shift away from private vehicle usage) includes no means of quantifying success (e.g. Bromley Council could introduce one new non-segregated cycle route for the Borough and claim they had taken the action they had committed to take). This is particularly frustrating when read alongside the AQAP’s suggestion there is little Bromley Council can do about the main locations of high air pollution – “our busy ‘A’ roads, the majority of which are the responsibility of TfL” (page 3) – when the most effective action the Council can take in relation to these locations is to proactively encourage mode shift towards walking and cycling, and car sharing (to minimise the number of single-occupant private vehicles on these roads).

5   Severe shortcomings in consultation process.Bromley Council has done very little to draw the attention of Bromley residents to this consultation. This matters, not least because DEFRA and Public Health England Guidance emphasises that “Engagement with various stakeholders, including other members within the local authority, those in the local health sector and the wider communityis foremost in ensuring air quality issues are tackled appropriately” (here).

A final word: air pollution is a killer. An academic study produced for TfL and GLA estimated that in 2010 the percentage of deaths in Bromley Borough that could be attributed to air pollution was 7.2%, or 182 deaths (page 26 of this report). Bromley’s residents deserve better than the draft 2020-2025 AQAP.

We are, however, concerned about the following issues:

We would request, therefore, that the consultation period be extended to 19 September and publicised, to enable all residents appropriate time to read it and complete the Council’s survey.

Bromley Living Streets is a group of residents campaigning for safer, quieter, low-traffic neighbourhoods which encourage healthier walking, cycling and cleaner air. We are affiliated to “Living Streets”, the UK charity for walking and cycling.

This letter is copied to:

Whilst always an important issue, air quality is critical during the Covid-19 pandemic due to the impact both have on our respiratory systems. (References: source 1 and source 2) 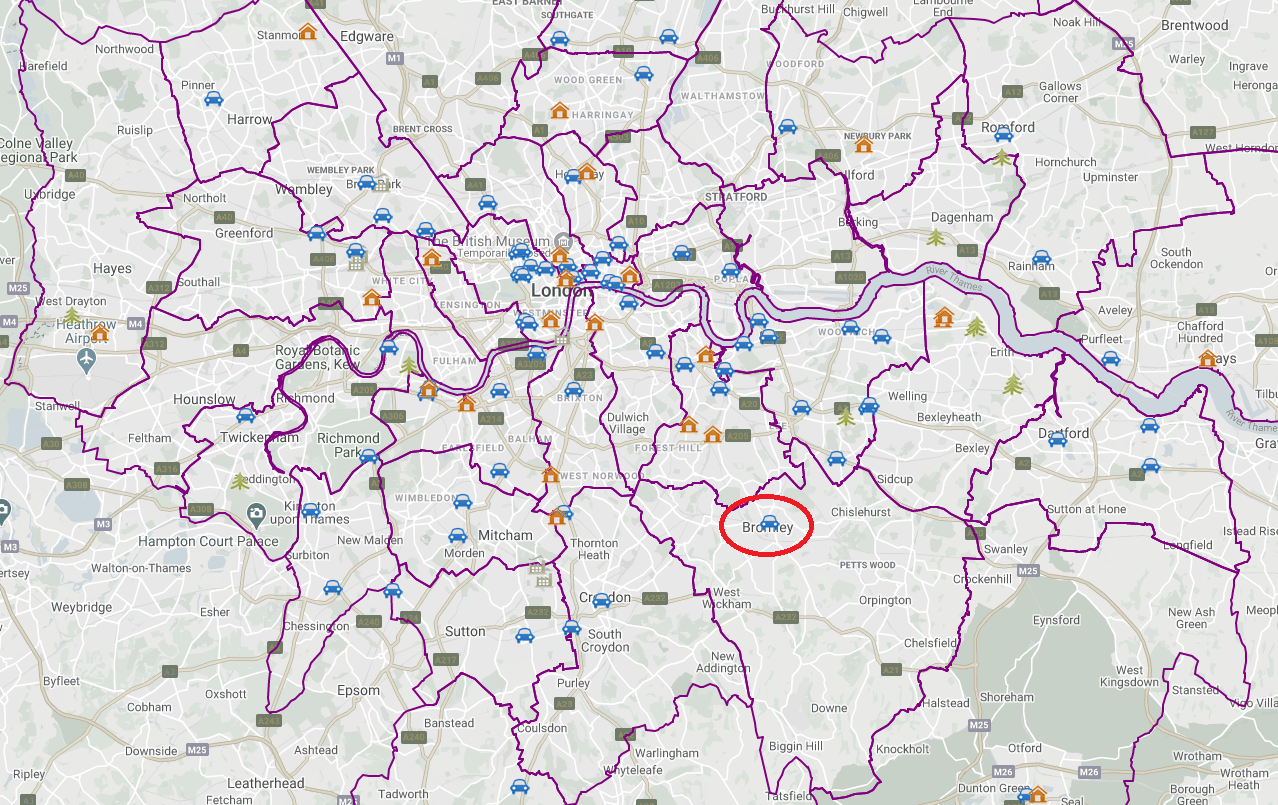 Bromley Living Streets therefore believes it is essential to collect good data in order to fully understand the quality of our air.

Despite being the largest borough in London by area, Bromley has only one continuous air monitoring site, located at Harwood Avenue, beside Kentish Way (here). Historically the borough maintained 6 active sites but 5 have now been closed (here).

Bromley Living Streets believes more monitoring is needed within the borough to get a fuller picture of our air quality. Given that “road traffic is the single largest source of N02 emissions within Bromley” (page 19), Bromley Living Streets also believes the Council’s air quality action plan needs to go further than simply promoting active travel. Additional benefits from active travel, other than those related to air pollution, such as reducing obesity in children, could be achieved if the Council committed to adding infrastructure that ensured walking and cycling were chosen over driving.

Public Health England says “short-term exposure (over hours or days) to elevated levels of air pollution can cause a range of health impacts, including effects on lung function, exacerbation of asthma, increases in respiratory and cardiovascular hospital admissions and mortality”.

If you are a resident and concerned about how air pollution in the borough affects your family please take a few minutes to let our Council know your views on their draft Air Quality Action Plan by filling out the Council’s consultation survey (here). The consultation ends on 27 July.

Give your feedback to the council using their survey and help stress the importance of collecting accurate air quality data at this time: Bromley Council Air Quality Consultation Survey

Feel free to contact Bromley Living Streets if you have any questions about our campaigns.